So it all started Friday, housewarming of two former roommates and prior to that the going away (moving out of the house) dinner of two more (now ex-)roommates. It was fun, enjoyable, nice to see some friends and just generally starting the weekend in a very relaxed manner.

Then came Saturday, wake up at 7.30 and grab all my gear of to a day of sailing (see also here) and on to Carnival in Sittard later that day. Arriving at Marina Port Zélande the search stated for the boat (if you still haven’t clicked, try here). What a beauty…

Here is a pic of the boat, there was a photographer on the water taking pics fo the practising but haven’t seen any links to those yet… This photo is taken in Barcelona. 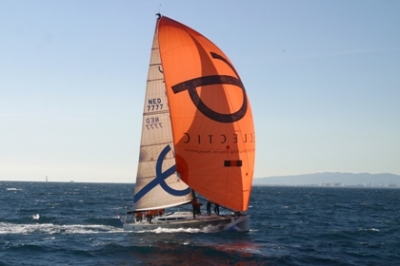 Ok, first some work needs to be done on the boat (isn’t that always the case?) and some things just took a bit more time then expected. The weather was nice though and the sailing later in the day was nice as well, just too bad my routine wasn’t really up to standards but learned heaps again. Not only does the boat look the business, she feels the business as well. The crew is definitely experienced and eager to learn as much and as fast as possible on how to improve the handling and performance of the yacht. Everything around the sailing was organised very well and I could have left my smock and trouser at home, sailing-gear was supplied (and no half measures have been taken in that department either).

The Dehler sails really nice, though I haven’t been able to sail the boat (trim or drive) but instead could focus on the work on the foredeck. Made little mistakes, didn’t have the correct solution for every situation present and had a new lay-out to get used to. But the tips from the team’s trainer (Gerd-Jan Poortman) really helped and were very motivating. I didn’t do a half bad job either, going to train with them next week again and I look forward to that already.

After sailing I jumped in my car and took off to Sittard for a dinner and some carnival. After two and a half hours through the Netherlands, Belgium and Limburg I arrived as the latest one of my club. Not much later, the beer was changed for wine as the snacks were changed for a lovely dinner. The long day and the combination with the alcohol took their toll and when quite some people of the group dipped in to the carnival-scene several others (including me) made our way to bed. It didn’t take long before the rest returned and all were sound asleep.

Sunday was again early rising and the return trip to Zeeland for some more activity on the water. Some DIY-ing but also practising the hobby I love so much and a great view from the top of the mast after checking the mast and all the fittings.

After a small drink in the marina time to go home, satisfied but tired.

One Reply to “Sunday evening…”