So 12-18 knots of wind was predicted, 20-25 knots were actually present. Together with 4 metre seas it was quite a day out on the water. Can’t say it was a good day though.

With quite a complete crew (best combination as well, I think up till then) and the skippers usual bowman back I stood at the mast position. He has had more time on the boat (and probably more miles under his belt) so nothing unusual there. So we went out for the first race, all went well, good start, great first beat but then at the top mark: stress. The communication hadn’t been that good, so the spinnaker wasn’t ready for the hoist and it took a bit more time than with a crew that has sailed together more often. But okay that has happened. Then on the downwind leg more speed than anticipated, so the takedown became too hasty and to make matters worsen, the jib wasn’t even hoisted jet…

Spinnaker down and we had flown past the bottom mark. So time to hoist the number 3, but the luff-tape started to tear of the sail… So, get the #3 down and stowed and hoist the #4 and continue racing… But when karma comes to get you… First Race DNF

Okay, let’s focus on race 2, just go full pull with #4 and let’s leave the spi for the final downwind leg. Good start, close to the line but not over (or were we…) and a reasonable beat. Even though I was on the rail hiking my ass off I felt as if the boat was behaving nicely, maybe a bit underpowered but I don’t recall any dumps with the main. With the #4 up (which looked like a great sail for setting whilst reaching under Genni) we got both reasonable speed and good height. Downwind was not too bad (surfing at 14.2 knots) and a First 40.7 trying to pass us underneath, but hardly managed that. Another upwind leg and then to the finish with the pink spinnaker set. The set was reasonable (but I have the feeling I’m not able to hoist the Spi easily). No need for a gybe so everything was nice and calm and back to the marina. The speed under spinnaker disappointed me just a bit (no new personal record). Cleaning the boat up and after that into the bar, only to hear we were OCS the second race… 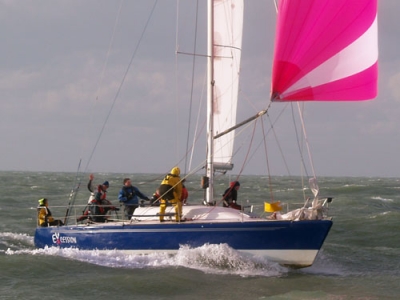 More Pictures at the race-website (in Dutch)