Monday was an interesting day for a number of reasons most notably it was the start of the new semester and it was the day that showed the heaviest snowfall in 18 years here in Southampton.

Wat this means? Well about 5cm of snow at around 8 in the morning and a country that almost completely shuts down. London had next to no public transport system going and right here in Southampton the people on the road displayed a incredible lack of understanding of what snow does to the surroundings… A large number of schools was closed and not just on Monday but on Tuesday as well and even more interesting was a decent amount of faculties cancelling all lectures. As for ship, we had a snowball fight amongst ourselves and just got on with it.

As I said the weather on Tuesday still had some snow left and since it was forecasted a lot of people in the UK decided to not even bother (and they are curious as to why their economy is being struck hardest…).

Anyway within Ship we tried to enjoy it the best we could whilst getting on with the new semester. The new semester has some challenging stuff for us lot but with quite a serious amount of the knowledge being applied at the same time. It includes a ship visit or two and numerous guest lectures. All in all a couple of weeks to look seriously forward to. Having said that the workload is also already starting to show.

The snow has gone now and it’s back to drooly wintery Southern England. A shame really as Soton actually looked almost half decent under a cover of an inch or two of snow: 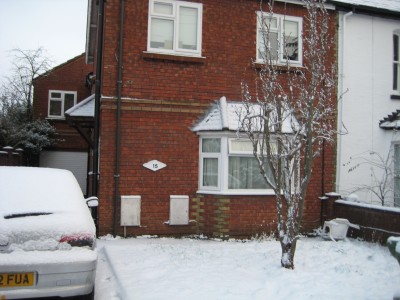