After the joys of caravan racing (mind you the racing was tough with a lot of banging boats) it was time for another weekend with the lovely Ker31. After the damage on Sunday the week before, Fred (from Radical Marine) and skipper Chris had done a great job in preparing her when I showed up on Friday morning. With a postponement in place the crew did a bit more tweaking and replaced some small bits and pieces resulting in a lovely shiny Sanguma. With all racing being cancelled about halfway through the afternoon the mooring lines were secured (and some added) before heading to Sue and the PV. Thanks to Rory and Will (two guys I know from Ship Science) I had a place to stay on the island and thus there was no need to worry about ferry-times.

Saturday was an early start with the crew of Hooligan VI (a farr40) with hopes of actually getting some races on the board. That was until we had looked outside and seen the state of the Solent. However still thinking there actually could be some racing we made our way to the marina only to see the ‘All racing cancelled’-notice to be put up by the RORC. This meant waiting at the boat till a seminar started on rules and preparation. The finishing of the seminar was the kick-off for my attempt to become a member of the PVYC (Pier View Yacht Club)… It was a long, long session but I succeeded. That is good thing since Sanguma features on the wall of the PV.

Sunday morning and conditions looked to have calmed down a bit. Still the wind was around 20 knots, quite shifty and with some challenging gusts but at least the RORC could get some racing in. Two races for the day and prize giving at the end of the afternoon. The first race was a windward-leeward-windward-leeward-short beat to finish. Even though the conditions did not allow Sanguma to get on a plane downwind, she showed good pace both up- and downwind. Even a small issue on the drop was resolved quickly and could be overcome. The result was a first across the line of the class and first on corrected time. 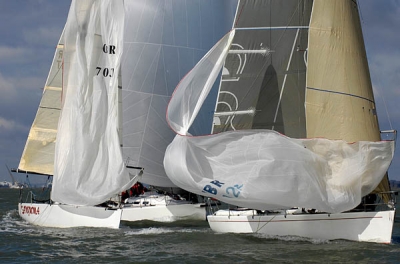 photo by Rick Tomlinson: Mark rounding with Sanguma in the windshadow of an inside overlap boat.

Time for the second race and the committee opted for a W-L type course around set marks. We seemed to have lost a bit of pace in both up- and downwind but persistence paid off and again we were first across the line in class. However on corrected time we finished third. That would make things interesting as the number two of the first race came either first or second in the second race and thus the end result depended on that. After cleaning up the boat (what a great thing to sail a single purpose boat, you’ve only got to put away the gear and you’re done) it was on to the prize giving where skipper Chris Walmsley could collect two Easter eggs and the trophy for first place. This then was celebrated in the beloved PV…